From the hands it came down
From the side it came down
From the feet it came down
And ran to the ground
This is my first cheat. This Johnny Cash album is a self-made compilation from the Rick Rubin produced American Recordings albums.
It opens with the brilliant Man Comes Around, used to great effect in the Dawn of the Dead re-make. This playlist also contains one of my favourite Cash tracks of all time, Ain’t no Grave. Ain’t no Grave sounds like striped down goth blues, kind of like if the Mission had been from Mississippi. While listening to this I have now realised how many of the tracks on these American Recording albums are about death or dying and it just so happens that they are the only ones on my playlist. Nobody does a death ballad like Mr Cash, sounding like Nick Caves grandfather.
Further on up the Road sounds like Johnny Cash filtered through Nick Cave. The Mercy Seat also curiously shows how influences work in loop and far from Johnny Cash influencing Nick Cave (which of course he did) Nick Cave has also influenced the Johnny Cash sound.
I listened to this playlist driving through TN to the North Carolina a couple of years ago, it made perfect sense listening to this as a soundtrack to the southern states. 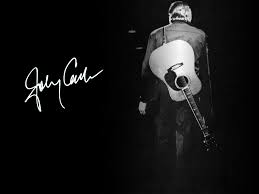