While most non-Beatles fans would say their favourite album is Sgt Peppers, I think their real ground breaking album is Revolver. Some of the tracks pre-date and preface psychedelia and prog rock. The whole album suggests a general shift from Pop to Rock which would be later mirrored in the whole of the music scene. As the whole album drips of LSD and general trippiness I thought I would recreate the experience and try to listen to the album on hallucinogenics. As I am a fat middle-age man with no connections to the drug underworld I instead opted for the more socially acceptable head cold and paracetamol.
The head cold actually did give the album an other worldliness. Tomorrow Never Knows actually induced a headache which being the last track was OK. The track of the listening session was I Want to Tell You. The discordant piano seemed to leap out of the speakers in my paracetamol haze, man. I am sure I read somewhere George Harrison invented Chords in this song. Even the more Beatley songs sound slightly jarring, and slightly off on this album, they were really out to deconstruct the myth. 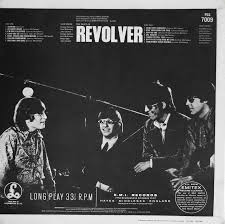