Ladies and gentleman ow do
And so opens the third Damned album, and the first one I was able to buy on release (I was too young for the first two). I bought it in the House of Andrews in Durham, a book and record shop which is now long gone. I remember staring at the album cover for ages while walking back home (I had spent every last scrap of money on the album, and had none left for bus fare) wondering what delights awaited me, was it going to be great? awful? If it was awful I would have wasted months of pocket-money buying it. I think there should be a theory, we can call it Schrodringer’s album. Before playing an album we can say it is both shit and great at the same time. It is only when we play it do we learn whether the album is actually shit or great, if we never play it, it could always be both. This is the fanboy’s paradox (a bit of a tangent, I apologise, but I am reading a book on quantum physics). I wondered on my way home if the album was going to be shit or great, actually while walking home that day it was technically both.
How could I fail not to love this album. From the into and opening bass growl of Love Song it is a magnificent beast. However, I do remember thinking, pianos? when first hearing Melody Lee, it is a great song though with some fine Scabies drumming.
Hidden gem : Smash it Up Part 1, providing the perfect quiet intro to the best song on the album.
Micro review: Nibbled to death by a 4 piece from London 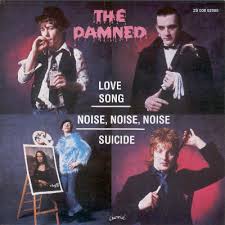