Talk about doing what it says on the tin. This album does exactly that, 1000 years of popular song, from Sumer Is Icumen In to Britney Spears, I kid you not. Richard T does a cracking version of Opps… I did it again (when this particular song was in the charts I remember referring to it as Opps… I did it again, I wrote the same song). Actually I have a small confession (or a large one depending on your musical taste), on Richard’s lips, this is a really good song. I wonder if Britney has heard it?
So many great versions on this album, a wonderful version of Shenandoah and great version of The Blackleg Miner. And his version of Money, Money, Money (yes, the Abba song) features some classic Thompson guitar, and makes it sound like a folk song (Maybe all songs are folk songs, in a sense).
Hidden gem: King Henry V’s Conquest of France, simply beautiful.
Micro review: Richard’s run through the 1000 year history of song, can’t imagine anyone else capable of doing this. 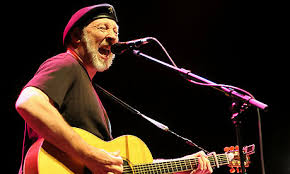