There was nothing that she wouldn’t do
I recounted this story a while back in relation to another album, however, I thought it also needs to be here as it directly relates to the album in question. In year 2 of secondary school I attended a school youth club with a nameless school friend. He was trying to get me to listen to, and possibly like, AC/DC. He was wearing jeans and a leather jacket, however he had no shirt under his open leather jacket. I always thought Robert Plant could pull this look off rather well, however my school friend’s barrel physique betrayed his love of pies, and a general avoidance of The Sun. This really wasn’t a good look for him, especially when he insisted on dancing to Touch Too Much, from the Highway to Hell album. That was the last time I saw him socially and because of that mental scarring, I haven’t listened to Bon Scott era AC/DC until today.
Shame I waited 30 years to play this again, it is sounding great tonight. But now I need to listen to Touch Too Much and try not to think of a rotund 13 year old dancing to it, and taking it far too seriously… Thank heavens for my advancing years and degrading memory, I came out the other side relatively unscathed.
Hidden gem: Beating Around the Bush, oh missus 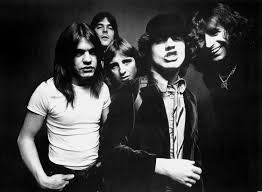