It is strange how words become really popular after being barely used. The word deleted for instance, the only time I would have used that word as a kid would be to refer an album that was no longer available, like this one which we could never get hold of. I remember scouring the big music catalogue in record shops back in the day and it would always have the word deleted next to this album. Now pretty much everything is available, which isn’t always a good thing. Kraftwerk guard their canon and brand like ninjas and this album is still very difficult to get hold of.
I like the idea (or sheer brassneck) of naming an album after yourself, I don’t want to give anyone ideas though, the last thing we need is an album called Lebon and Taylor, or Bono and Edge.
Tanzmusik, is a great track and gives a little glimpse of what was to come, both in the Kraftwerk canon and pretty much everything else since. I tried to convince my daughter to dance along to this, she wasn’t convinced and sighed and shook her head (I think Kraftwerk will always be a lads band).
Hidden gem: Heimatklänge
Micro review: Flute playing from the German Treckies of pop 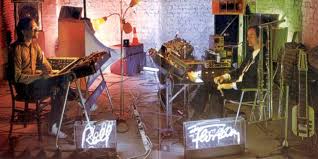 One thought on “Ralf and Florian – Kraftwerk”