A strange thing happened last week when I was in Dublin. Strange noises emanated from the guy in the room next door to me in my hotel. I stood with my ear pressed to the wall, as you do, and it turned out to be the sounds of Search and Destroy by The Stooges, I could swear it was. So I listened to the whole album tonight with my ear pressed up against the wall, I didn’t actually. When I saw him in the corridor the next day he looked about 90 years old, although saying that so does Iggy Pop. Somebody asked me once what this album sounded like and I said The Rolling Stones on heroin, erm… but I guess The Stones already sound like The Stones on heroin.
Well back in the UK today I decided to listen to the album, but of course as is my nature I put the album on, went into the other room and listened to Search and Destroy with my ear pressed up against the wall (hey, I was curious). However I couldn’t hear the album above my wife’s sighing.
This is a great album, and sounds amazing tonight. Search and Destroy and Gimme Danger are fantastic, but also very different kinds of songs (I love the end of Gimme Danger, especially the guitar wigout). And the title track really is the template for every punk song that came after.
Somebody asked once what the difference was between punk and metal, although I didn’t have a witty retort at the time, I just shrugged my shoulders and said, I don’t know. Well I do now, Metal is optimistic, punk isn’t, it is as simple as that really.
Micro review: For three and a half minutes Search and Destroy urinates on 1960s optimism, in fact the whole album does. 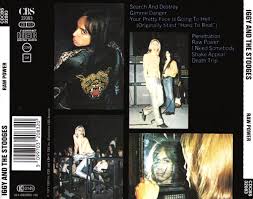