I am back in Dublin and listening to the bar entertainment across the street. Various heavy set Irishmen with moderate guitar skills are playing The Wild Rover, all night, every night (it sounds like Unionist pergatory). Although one night last week the song was distorted with feedback and sounded like the Irish Tourist Board had hired the 1970s proto-punk duo Suicide to do an album of traditional Irish songs (If they were ever to do this, take it from me, it sounded quite good).
I think The Pogues were always more Suicide than Foster and Allen. This is a great album, littered with Shane gems and it always manages to put a smile on my face. I still think the best song on the album by a country mile is A Pair of Brown Eyes, this is Shane, the grown-up songwriter.
Micro review; Still gritty and made before Shane became the Poet-in-residence for Bushmills
Hidden gem: Wild Cats of Kilkenny 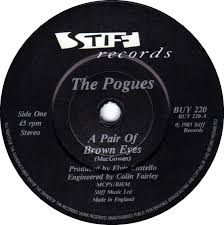