A seasoned-up hyena could not have been more obscener
Can I ever watch a music show and get shocked by a performance again, I don’t mean some daft girl with her baps out, that is an everyday occurrence in many small towns across the north-east. I mean, like when I first saw Ian Dury doing What a Waste. I viewed Ian Dury with a mixture of fascination and fear, a bit like how I viewed Cat Weasel a number of years before.
This is a great album with some great tracks, Billericay Dickie sounds like x-rated Chas and Dave and still makes me laugh. When I first heard this album, after hearing What a Waste I was surprised by its jazz and funky elements, listening now it is those touches that make it great. The heart of the album, for me, is Sex and Drugs and Rock and Roll, fantastic, and has become a term of abuse, or endearment depending on your taste.
When I first had this album it was on cassette. I could never figure out if it needed Dolby B or Dolby C and I still feel like some tracks need the hiss, they sound odd without it.
Hidden gem: My Old Man 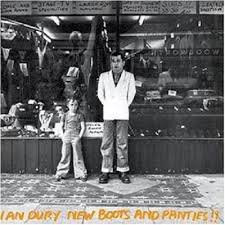