A couple of weeks ago I was going back to my hotel, in Dublin, after work. I turned into the entrance and was met by about 15-20, 40-something men all standing at reception. After waiting to retrieve my key I struck up a conversation with a couple of them, and it turned out they were off to see Madness that night at the O2 just down the river from us. I thought no more about it until I was awoken at about 4am to the sound of 15 drunken Irishmen shouting One Step Beyond!! at the top of their voices, oh happy days. The next couple of days the phrase just became embedded in my head. So I thought I would dig this out today and listen to the band shouting the phrase.
One Step Beyond is a great track, if you ever want to get a party of 40 odd year-olds dancing, put this track on (Night Boat to Cairo also works), and clear away any breakables. I have never seen so many red faced men falling over furniture, it was a great night.
Many people throw around that old chestnut, national treasure far too easily. There are not many bands that I would call national treasures, but if I were to pick, I would have to say Madness would be one of them. 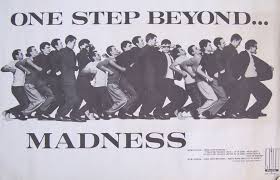