While walking through Dublin tonight I came across a man urinating in the middle of the street, not clandestinely, right in the middle of the street, in front of a sea of commuters. Upon seeing this I was reminded of this album, especially the first track, not that it was the biggest I have ever seen, but quite possibly the smallest.
Number 7 in the Top 10 of things you would never hear at parties; I know what will get this party rocking, let’s put some Arab Strap on. Many people talk about Morrissey or Leonard Cohen being depressing, but they have nothing on Arab Strap, these guys know bleak. Songs of empty relationships, one night stands, watching afternoon soaps and general drug dependence, well so goes their marketing campaign. Among the startling and bleak lyrics is something very beautiful though, that is hard to define.
Hidden gem; New Birds
Micro review: It was the biggest cup of Horlicks you’ve ever seen, but you’ve no idea, where that cup of Horlicks has been.
Warning: Not to be listen to at a mixed family gathering. 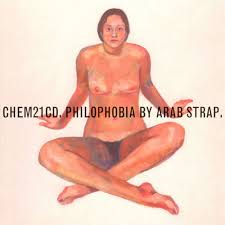 One thought on “Philophobia – Arab Strap”