If he was singing on street corners in present day Atlanta he would be called Visually Impaired Willie McTell, doesn’t quite have the same ring to it.
There are some wonderful songs on this, I picked this album in particular because of these early recordings are just outstanding. Broke Down Engine blues, hey, I hear you brother, I have been there this week. More accurately though my particular problem would be Broke down Central Locking Issues Blues. Once upon a time you could have watched an amazing documentary on Channel 4 in the UK on these early bluesmen, not now though, I noticed today they had a show called Embarassing Fat Bodies, says it all really.
Hidden gem: Ticket Agent Blues
Standout track; Statesboro Blues, covered by the equally magnificent Allman Brothers Band. 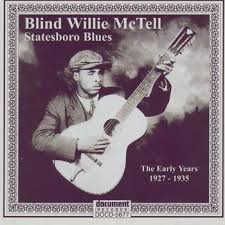