After having a pretty awful day at work today, I caught 20 minutes at the end of the day (all you need really for a Ramones album) and I played this album as loud as my ears could take. It was the best tonic ever, I left the office with a renewed sense of purpose.
Along with Jimi Hendrix and Bill Hicks, The Ramones were a much bigger deal in the UK than in their own country and this live album, recorded at the Roundhouse in London, proves it. They could barely get a gig outside of New York in the US. In the UK they were hailed as conquering heroes of the punk scene, now they are a tee-shirt.
Something to do next time you are out and about in your hometown; When you see a stroppy teenager with a Ramones tee-shirt on, immediately go over and quiz them on UK v US chart placements of the first 5 singles, using only the official BBC chart of course.
Best lyrical moment; 1, 2, 3, 4
Micro review; Still one of the best live albums not recorded at the Budokan 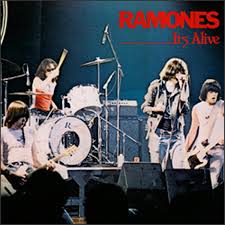 2 thoughts on “It’s Alive – The Ramones”