The transformation of this band is startling, imagine the Spice Girls slowly morphing into The Slits and are you are almost there. Starting as a Duran Duran lite, New Romantic pop band, they entered the 1990s as an avant-garde, free form, post-rock (the first I would argue) band, whose final album (Laughing Stock) is impossible to classify.
The strange thing about Laughing Stock, you could walk into any record shop in South Korea in the mid-90s and buy it. I know, because I did. Go into a coffee shop around the campus’s of Yonsei or Seoul universities and you were guaranteed to hear it. Their most non-commercial album in Europe was an apparent success in Asia. It was great for me, I lived in this alternate universe where people preferred Laughing Stock to What’s the Story Morning Glory.
Probably one of the easiest listens of the week. I never tire of this record, or Spirit of Eden and I would be hard pushed to single out a track. However the 3 song sequence that made up the old side A of the LP, Myrrhman, Ascension Day and After the Flood. 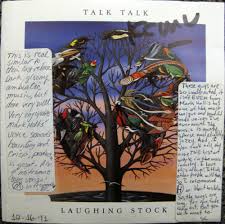