What to write for a second post?
A couple of years ago I witnessed a great, almost jaw dropping event. Patti Smith doing an acoustic songs and spoken word gig. Apart from hearing great stripped down versions of these songs, which was great. It was also the most interactive show I had seen for a while. Between the songs and book readings there was an almost non-stop dialogue going on with the audience. It got me thinking how many other artists would engage and encourage this, not many.
Banga is great. Let’s get that out there from the off. Is there any other artist, who has been around since the early 1970s, who can still surprise and make good albums. I am struggling to think of one at the moment.
Opening with the absolute gem Amerigo, it sounds both contemporary, and classic Patti. Stand out tracks from first listen: Maria, Mosaic and the wonderful and haunting Seneca. Possible grower: Tarkovsky (the second stop is Jupiter). 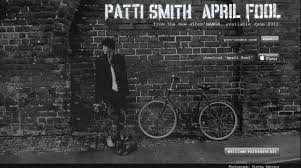