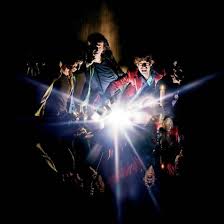 Back in the day (which, based on my age could be anywhere between 1978-1998, but I think it would have been around the late 1970s) I hung around with a guy one summer, he moved away and I never saw him again. His father wasn’t around and it was just him and his mother and an absent older brother, who I suspected was in prison. His mother always smelled of cigarettes and Avon perfume, a heady mix. I have smelled this aroma since, usually when walking through a bus station. Anyway, unlike any other adults I knew she owned a fair whack of Rolling Stones albums (although she was the correct age, I always thought it was weird).
She had this album, as back then, it was the most recent. I decided to listen to Some Girls today as I want to be controversial. And here is is, this is the last great Stones album, there I have lit that touch-paper. There have been some good albums (Emotional Rescue, Tattoo You), and also many terrible ones since, but Some Girls is the last great one.
Miss You was the first thing I heard by the Stones, and it is still a great track, and a great single. The title track is where it is at though, classic Stones, sleazy blues with racist overtones.
Micro review: Here’s a line you won’t hear at a Stones gig in 2012, now we are going to play 3 or 4 from our new album.